Somewhere over the Double Rainbow…

This week’s Memory Monday Photo submission comes to us from Linda Reilly of Williamsburg, Virginia who stayed with Outer Banks Blue this past April in the property “Sentimental Journey” in the Sanderling subdivision in Duck. 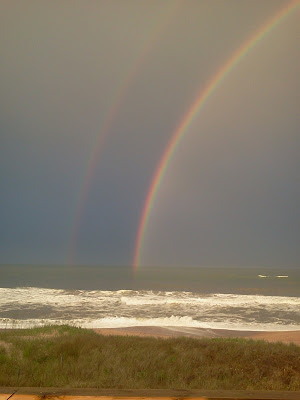 Scientifically a double rainbow is caused when rain droplets refract light twice rather than just once as occurs in a regular rainbow.   There is always a dark area between the rainbows, and the 2nd rainbow shows the colors of the first rainbow in opposite order of colors.  If you look at Linda’s rainbow carefully you can see the rainbow on the right starts with green then yellow, and then red.   Look at the rainbow on the left closely and you can make out the fact that the colors are red, then yellow and finally green…..see?  Opposite colors.
Science aside we understand some like to think that there is a deeper meaning when a double rainbow is seen.   In some eastern cultures a double rainbow signals a transformation of some sort is taking place the first rainbow stands for the material and the 2nd rainbow stands for the spiritual transformation of the person viewing it.
If you look about on the Internet you can see many stories of double rainbows appearing during trying times in people’s lives, and deep messages being received.
We just think they look cool!
Thanks Linda!
All the best from the beach!
By Tim Cafferty, President, Outer Banks Blue Realty Services