Hurricane Sandy has done her damage and we are all picking up the pieces literally here on the Outer Banks.

The biggest impact from the storm was the unprecedented ocean overwash that occurred over 5 consecutive high tides along the oceanfront area.    Kitty Hawk and Hatteras Island were particularly affected by the tides as both areas experienced significant overwash after dunes were breached.

Most roads are open this morning but the following roads remain closed this Tuesday morning:

-Highway 12 on Hatteras Island remains closed at the Oregon Inlet Bridge.
-Highway 12 in Kitty Hawk is closed.
-US 158 is closed in Kitty Hawk in front of our office at Outer Banks Blue (4.5 milepost); however traffic is being rerouted through our parking lot and into neighborhoods on the west side of the road.

Motorists are urged to use extreme caution as they drive today.  Salt water is extremely corrosive and has devastating long term impacts on vehicles.

As stated above the ocean overwash in Kitty Hawk was so significant that the water actually travelled all the way across the 5 laned US 158.   The flooding was particularly severe in front of our office here in Kitty hawk and the Kitty Hawk Police actually closed the road last night due to the threat of danger to those that would attempt to drive through the water that was at least 12″ deep on the roadway.

Hatteras Island has received a major blow from the storm as Highway 12 has several areas where pavement is missing and in need of repair before the road can re-open.   A portion of guard rail is missing from the Oregon Inlet Bridge making the bridge unsafe for passage.  There is a section of roadway just south of the New Inlet Bridge that is missing.  There is a breach in the roadway just north of Rodanthe, and there is a breach in the road just east of the village of Hatteras.   There are also power outages around Hatteras, and telephone and Internet is down on the island due to a fiber optic cable being cut in the Rodanthe area.

The Dare County Emergency management group reports that a ferry is expected to begin making runs between Stumpy Point and Rodanthe so that supplies and residents can get on and off of the island.

Meanwhile we continue to receive many interesting pictures from friends who witnessed the storm in their own way.   This was truly a tremendous photographic event! 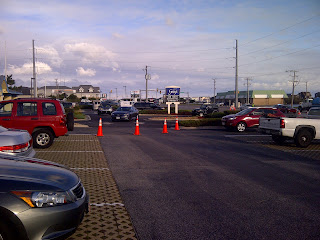 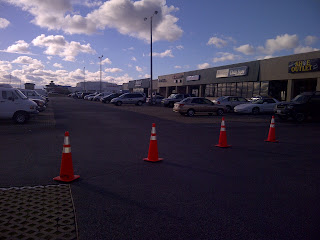 Rt. 158 is being routed through our parking lot this morning 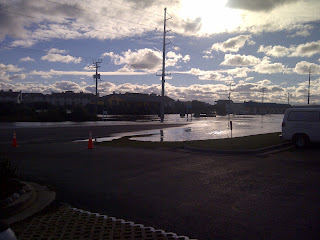 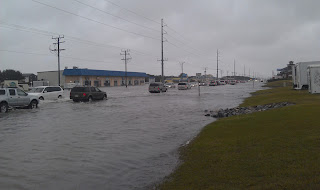 Looking south on Rt. 158 in front of our office on Monday evening 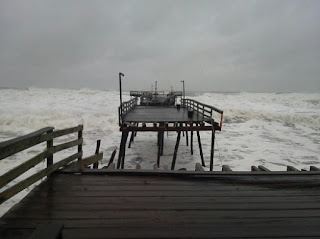 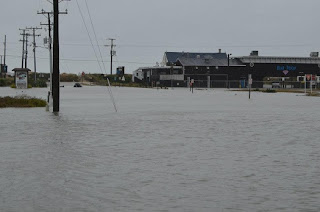 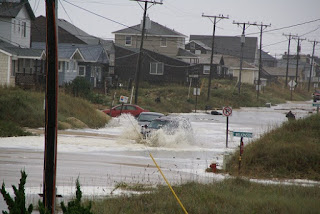 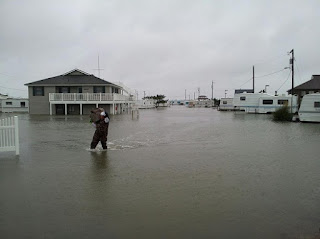 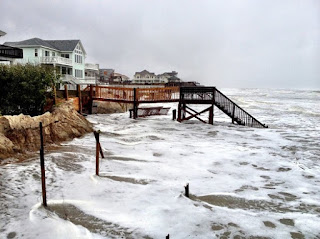 We will continue to update this blog post throughout the day with new pictures so check back with us soon.