Hurricane Arthur is rapidly pulling away from the Outer Banks and damage assessments are underway.

The storm came ashore last night south of Ocracoke as a category 2 Hurricane and raced across Pamlico sound exiting over Oregon Inlet before dawn with winds in excess of 100 MPH.   At 7:00 AM the center of Hurricane Arthur was 65 miles east of Kitty Hawk and headed to the northeast at more than 15 miles per hour.

Effects of the storm are still being felt all along the Outer Banks this morning with rain bands continuing to soak the beach while winds are sustained at more than 40 miles per hour at this time and gusts in excess of 60 mph.

Damage assessments will be done this morning. 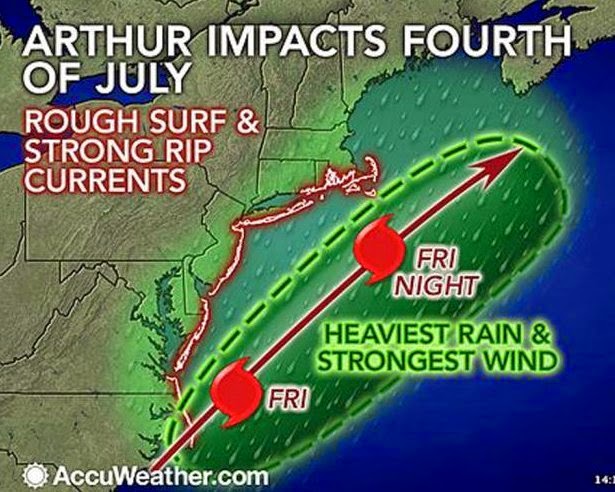 For a time this morning access to the northern beaches was blocked by authorities while roach conditions north of the Oregon Inlet bridge were verified to be safe.  Traffic was stopped at the Wright Memorial Bridge at approximately 5 AM this morning, but the bridge was re-opened at 6:45 AM.  Access to Hatteras Island continues to be blocked until further notice.  It is expected, as predicted, the majority of damage from Arthur occurred on Hatteras Island with the soundside of the island sustaining the brunt of the storm.

Overnight the storm took a strong “jog” to the west of its earlier predicted path and instead of skirting the far southern coast of the Outer Banks as expected, the storm entered the Pamlico sound, thus exposing the villages of Hatteras, Frisco, Buxton and Avon to the strongest quadrant of the storm.

A mid-morning briefing is planned from local authorities, and we will provide a follow up update at that time about any damages that have been discovered.