Damage assesment crews have scoured the Outer Banks and it appears the damage from Hurricane Arthur is, for the most part, insignificant.

The storm made landfall early this morning on the Shackleford Banks (south of Ocracoke) as a Category 2 Hurricane with sustained winds of more than 100 MPH and moved northeast over the Pamlico sound before exiting over Oregon Inlet and South Nags Head.   The eye wall passed over the southern most part of Nags Head at approximately 4:30 AM this morning.

Outer Banks Blue Vice President of Operations Laik LePera who had the eye pass over his house described the experience as “surreal” as he was awake when it happened.   The strong on shore winds winds stopped suddenly and then picked up moments later from the opposite direction as the eye moved out to sea away from land.

﻿﻿Outer Banks Blue employees have been checking our rental properties all morning and have found little if any damage.   The south Nags Head area did experience some road flooding, and some sand is covering walkways and decks in that area.  Several of our work crews are out power washing decks and walkways, shoveling sand, and wet-vaccing carpets. 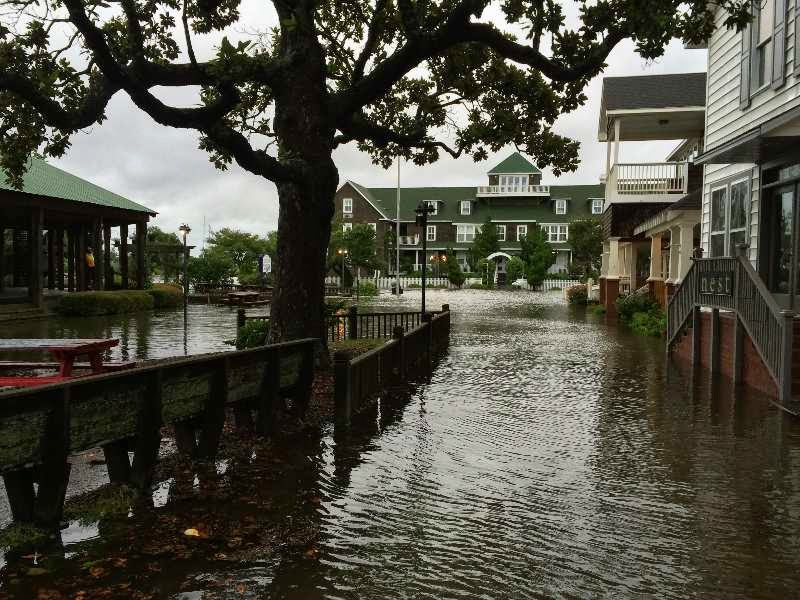 Overall the Outer Banks communities fared very well with the majority of damages reported were the result of soundside flooding.   The town of Manteo on Roanoke Island had residents waking to all streets being flooded (see pictures).   The causeway road from Nags Head to Roanoke Island was also cut off for a time this morning as the Roanoke sound flooded the road completely.  A story was widely publicized on The Weather Channel this morning regarding a pregnant woman going into labor and not being able to access the hospital.  The cable television channel broadcast live images of the woman in a large National Guard vehicle that took her across the flood waters to the hospital to give birth.  The island of Colington was cut off from vehicle access this morning as the winds shifted to the northwest when the storm was pulling away and the sound water flooded the only road providing access for Colington residents.

Some sporadic power outages were reported around the Outer Banks due to power lines that were blown down, but Dominion North Carolina power responded quickly to restore all outages as they had brought in more than 50 bucket trucks from other areas to assist with power outages.   At this time fewer than 100 customers are still without power on the northern beaches whereas more than 3,000 had no power at 6 AM today.

Road access is now unencumbered on the northern beaches and there should be no issue with honoring all check ins this weekend at Outer Banks Blue.

One area of the Outer Banks that did not fare as well is Hatteras Island.   The road to Hatteras Island remains closed and a mandatory evacuation order is still in effect as damage assessments continue on the island.   The “new inlet” bridge that was erected after Hurricane Irene sustained damage and the road was reported to be impassable for a time.
﻿

No official report has been distributed on the bridge, but without the “little bridge” the island is effectively cut off from vehicular traffic to and from the north.

Weather conditions have improved rapidly through the day as the rain has stopped, the sun has come out, and winds have diminished to less than 15 MPH in the last hour.