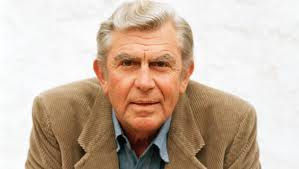 Folks from around the Outer Banks are mourning to loss of undoubtedly its most famous resident – Andy Griffith, who died on the morning of July 3rd at his home on Roanoke Island.
Nearly every “local” had some encounter with our very own Hollywood star even though he lived a very private and secluded life on his 70 acre estate just on the outskirts of Manteo. While Andy would frequent a few well picked local eateries and shops such as Basnight’s Lone Cedar café in Nags Head where he had his own special room, Owens restaurant, and sometimes he would be seen at the Lost Colony outdoor drama where he starred as Sir Walter Raleigh decades ago. There were tales of random sightings at the local pharmacy, hardware store or local newsstand, but he spent the majority of the last 20 years behind a non descript gate at the end of an unmarked driveway off of U.S. 64 on the north end of Roanoke Island. 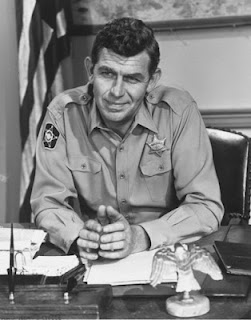 The iconic star of the Andy Griffith Show had a down to earth manner about him with his on screen persona, but also in his everyday life. I actually remember coming across him at a store in downtown Manteo when I was a high school student. I can still remember noting that he was barefoot and wearing cut off shorts when I came across him. I knew exactly who he was, but didn’t react like the rabid fan that I truly was (I saw every episode of The Andy Griffith show 10 times), and he seemed to appreciate that by looking up from his magazine staring me in the eye, giving that amazing smile, and saying “Hey…how you doin’ today?” I almost felt like his deputy sheriff Barney Fife or Floyd the barber from the television show days when he would always greet his friends “Hey.”
I always felt that “Ange” decided to settle outside of Manteo just because of the interaction I had with him. Folks respected who he was, but gave him the privacy. He responded right back with respect and discretion. All the locals knew which driveway was his, and exactly where his house was located, but you simply never saw any locals mob him for an autograph or ask him to pose for pictures. He enjoyed his privacy, and Outer Bankers gave it to him. As I remember his last two decades I can only recall two very public appearances by Andy. One was standing up to fight a chain store grocery chain from coming to Roanoke Island (his team won), and the other was to attend the ribbon cutting ceremony on the “new” Manns Harbor bridge in 2002 from Roanoke Island across the Croatan Sound to the mainland. He and his beloved wife Cindi helped cut the ribbon on the new 5 mile long “Virginia Dare Memorial Bridge” and then were the first to drive across the new 4 lane span in a vintage automobile with a rumble seat. He was driving the vehicle (pictured here) with the Governor of North Carolina (Mike Easley) and his wife in the back seat.
Griffith, in spite of his reclusiveness, was very much a giver to the local community. In the early 80’s Griffith helped to form the Outer Banks Community Foundation (www.obcf.org) . The Foundation, celebrating its 30th year in existence has given more than $4 million in charitable activities back to the local community including hundreds of college scholarships to deserving students. 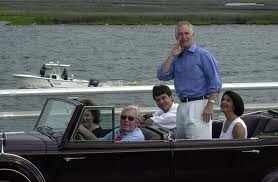 A native of Mount Airy, North Carolina Griffith was a graduate of The University of North Carolina at Chapel Hill and became familiar with Roanoke Island and Manteo when he came to be a member of the cast of the outdoor drama “The Lost Colony.” He started in the annual summer production in 1947 when the production was just starting its 10th season. He started as one of the production actors, but in 1949 he got the starring role of Sir Walter Raleigh in the play and he kept that role until 1953. It is said that during that time he was walking through the woods near the Waterside Theater when he came across the land where his current residence exists and he decided immediately that is where he wanted to build his dream home.
In addition to Griffith’s many film and television credits (A Face in The Crowd, The Andy Griffith Show, Matlock, etc.) one of the most notable entertainment accomplishments of Griffith was a comedy routine entitled “What is Was – Was Football” where he delivered a side splitting monolog describing the first time a naïve country boy witnessed the game of football being played. “and I think it’s some kindly of a contest where they see which bunch-full of them men can take that punkin an’ run from one end of that cow pasture to the other’n without either gettin’ knocked down—‘er steppin’ in somethin’ !” It is still a funny bit nearly 60 years after it was performed by Griffith on the Ed Sullivan Show.
Griffith by any account was a huge Hollywood star. 8 years of a top television show in the 1960’s, numerous film credits, a notable Broadway resume, and a surprising hit television series in the 1990’s “Matlock.” But with all of his credits he seemed to be most proud of his down-home roots. Eddie Green, a noted merchant, former Mayor of Manteo, and fan of the arts was in The Lost Colony with Griffith in 1953. Green said “Everyone took pride in knowing Andy.” That really sums it up for the folks of the Outer Banks.

It is also notable that even in his death Griffith was careful in his plans to not allow himself to be celebrated or viewed by the public eye. Griffith died at approximately 7 AM on Tuesday morning. Pursuant to his wishes he was buried within 3 hours of his death.