Greetings from Kitty Hawk. It has been an interesting summer here on the Outer Banks, and it is hard to believe we have just a little more than a month to go before Labor day and the unofficial end to the summer. So far this summer we’ve seen our share of guest irritants, but everyone seems to be in fairly good spirits and working through things that are out of everyone’s control. Some of the items that have been dealt with so far this year include:

Chesapeake Expressway Price Gouging.
There is just no two ways to say it. The City of 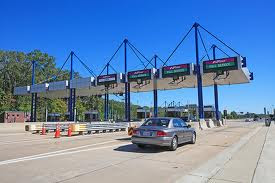 Chesapeake, faced with a budget shortfall, took an easy way out of solving their money problems. The city council decided to increase the fees on the toll for the Chesapeake Expressway from $2 per car per trip to $6 per car per trip. Taxation without representation! When some citizens objected and various voices of opposition stepped forward the council decided to only charge the $6 on Saturdays and Sundays thus specifically targeting travelers to and from the Outer Banks. Outer Banks area business leaders and the director of the Outer Banks Visitors Bureau have specifically asked repeatedly for the city of Chesapeake to reconsider their money grab, but as of the end of July the weekend tolls continue to exist and our visitors continue to pay the price to use the “expressway” through Chesapeake. This tacky move has actually resulted in a huge increase in traffic on the road that was in place before the expressway was put in place.
That alternate route: Battlefield Boulevard can be picked up by OBX Bound travelers at exit 8B (Hillcrest Parkway) on US 168 south, and then continue just about 4 miles before you pick up 168 south just north of the North Carolina State Line and beyond the toll plaza. Likewise Northbound travelers are readily taking a left turn at Battlefield Boulevard just before entering the Chesapeake Expressway and by-passing the by-pass and saving the cost of the toll again coming out at Hillcrest parkway north of the toll plaza.
While it is our hope that the weekend toll increase will stop, it is probably not likely until the local residents of Chesapeake start to stand up on behalf of the travelers crowding their neighborhood roads. We can always hope for a less expensive resolution for our visitors soon!

Pains Bay Fire
Seriously, who on the Outer Banks even knew there was a place named “Pains Bay” until May when an enormous forest fire was started by a lightning strike? The answer is not many folks, but the term “Pains Bay” has been a pain in the backside for all Outer Bankers and visitors to the OBX earlier this summer. The fire is 100% contained now, but over approximately a 6 week period from Mid-May through the end of June the smoke from the forest fire was absolutely debilitating to various areas of the Outer Banks. A thick, sweet smelling, and putrid wall of smoke would literally engulf parts of the Outer Banks depending on which way the wind was blowing during the height of the fire. The smoke was even felt as far north as Norfolk and Williamsburg some 100 miles from the fire.
The fire was started on May 4th by a lightning strike, and over the following weeks there was more than 45,000 acres (75 square miles) that burned. Hundreds of firefighters from around the area, and state came to assist the forestry service in trying to contain the fire, but the rich peat like soil under the fire worked as fuel for the flames and made life miserable until 6 inches of rain was dumped on the fire at the end of June to effectively extinguish the fire. Code Red air quality advisories were issued nearly daily, youth softball and baseball games were cancelled because it was dangerous for the kids to be playing in the smoke, and guests trying to enjoy the beach were choked by clouds of smoke from the fire. Literally millions of gallons of water was pumped onto the fire trying to contain it over many weeks, but ultimately it took mother nature to stop what she started with a single lightning strike in May.
As stated about a few days of sustained late June rains have all but put the fire out completely and it is nothing but a “cloudy” memory.

“Re-Opening” of an Outer Banks Landmark
Hurricane Isabel in September 2003 was one of the strongest and most memorable storms the Outer Banks has seen. The storm opened a new inlet on Hatteras island, destroyed hundreds of homes, moved acres of sand, and it took out one of the oldest landmarks in the area when more than 500 feet of Jeanette’s Pier was overcome by the pounding waves of the storm. The pier had stood strong against storms for 64 years prior to that storm.
8 years later and with a great deal of help from the State of North Carolina (they purchased the property, and then placed funding to rebuild the pier to the tune of $25 Million) a state of the art concrete pier is in place at the site of the old Jeannette’s pier. The new Jeanette’s pier opened as a new entity in May of this year, and is being operated by the North Carolina Aquarium. What a beauty she is too with 3 state of the art wind turbines generating electricity, fabulous exhibits with local fish swimming in tanks for all to see, you can even rent a special event room on the top floor of the pier house for a business meeting or a wedding reception that will never be forgotten.
The pier has become THE gathering place in Nags head for beachgoers. Take a look at what’s happening at Jeanette’s with this link http://www.jennettespier.net/

The Town of Nags Head has long suffered the effects of erosion and some of the town’s property owners have watched helplessly as their vacation homes crash into the ocean over the years. Stepping out in front of the other municipalities Nags Head became the first Outer Banks’ town to apply for permits, arrange for financing, and ultimately begin the process of beach nourishment.
The timing of the project was not ideal for early summer visitors as the dredges came to town at the end of May and the large pipes that routed the sand from the dredges off shore onto the beaches and on various hot spots became THE beach accessory of the summer. The project has been going strong every hour of every day since that first dredge arrived as the machines work 24 hours, and the workers use spotlights on the beach to ensure they do not miss one minute of an opportunity to grow the beaches in Nags Head. It has been an incredible transformation of the beach in Nags head with some areas adding nearly 100 yards of useable beach. The speed at which this project has moved has been incredible as it seems it will be completely finished months ahead of schedule. The town of Nags Head has done a good job of informing everyone on the daily progress of the project through their website www.townofnagshead.net . Take a look at their site and particularly some of the before and after photos of the shoreline.

All in all it has been an eventful, but good 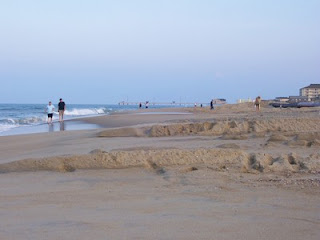 summer for locals and visitors. Outer Banks Blue is experiencing very strong bookings for the remainder of the summer. At this time the weeks of July 23rd, July 30th, August 5th, August 13th and August 20th are completely sold out at Outer Banks Blue. No availability exists at all for any of those weeks, and the week of August 27th shows only 8% of our properties still available while the week of Labor day (9/3) shows just 37% vacancy rate at this time. People are definitely coming to the Outer Banks this summer and enjoying a family vacation no matter what obstacles have come up!

Until next time, all the best from the beach!