Good Memories of a Great Man.

Please forgive me as today we are putting a twist on Memory Monday.   Today I am paying tribute to a man who helped shape my life and has provided me many great memories.

I was awoken Sunday morning with a message from my brother who gave me the sad news of the passing of Coach Dean Smith of the University of North Carolina.  Coach Smith has been in rapidly declining health since 2010 so it was not a complete shock to get the news, but it was no less a sad day as the world lost a man of great integrity and principle.   I lost a person who provided a guiding light of how to conduct yourself as a man. 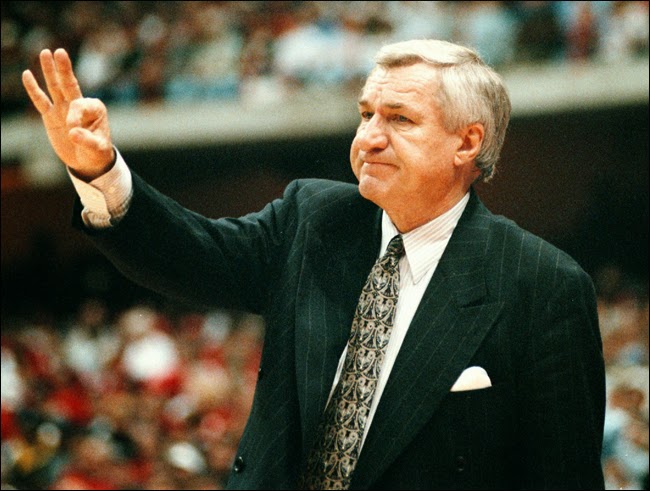 Most are not aware of the fact I lost my father to cancer when I was 13 years old.  I immersed myself in sports in high school and set a goal of going to the University of North Carolina at Chapel Hill to play basketball.  As most start struck teenagers I idolized the athletes I saw on television and aspired to emulate them.  Phil Ford, Tommy LaGarde, Mike O’Koren, Dave Kuester were some of the names of Tar Heels I watched and tried to copy.  All along I knew who the coach of UNC was, but he was an unknown to me. He was just the guy that called time outs and shook hands with the other coach when the game was over. Once I arrived on campus I, through a series of fortunate occurrences, got the opportunity to work on the Tarheel Radio Network with famous Play by Play announcer Woody Durham.  I never was officially introduced to Coach Smith, but after seeing him only a handful of times I remember him coming up to me and congratulating me on my broadcasting of the Lady Tar Heel basketball game the night before.  I was hooked at that moment (I wasn’t even sure ANYONE has listened to the game, much less Coach Smith!), and became obsessed with his preparation, attention to detail and his compassion for others. 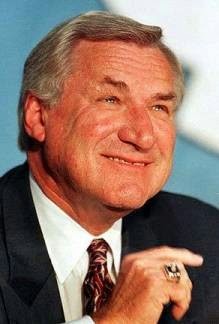 Over the next couple of days you will hear many stories of his attention to detail, his passion for education, care of others, his care of his team, monolithic memory, and his evasion of the spotlight. You may also hear of his questioning authority.  I can tell you that in my experience of being around him for 5 years that every story you hear is true, and  that is why I can say like so many Tar Heel ball players that yesterday’s news is akin to the feeling I had when I lost my dad.

He remembered people’s names after one chance meeting (I will NEVER understand that skill). He prepared so meticulously for each game that at the end of contests I witnessed from the bench 3 different times when he predicted the exact play the opponent would be calling (“OK men, here’s what they are going to do”). His practices were an orchestration of precision. There was a written daily practice plan outlined to the exact minute of what would happen each day.  During time outs you would NEVER see him huddle with his coaches as you so often see these days.  He said to me one time “that is what you do in the summer, we only have one minute to talk with our players…why would I waste that precious time showing indecision?” Preparation was above all the product of hard work in advance of the moment.

He treated every person he came in contact with great respect, and he treated his team in a first class manner.  My brother encountered Coach one time many years ago and each time he saw him after that Tom was always remembered.  You will hear hundreds of stories like that repeated this week.  Coach always ensured his “student athletes” stayed in the nicest hotel in town whenever an overnight stay was required (think the Plaza hotel in New York, the Hotel Del Coronado in San Diego, etc.) .  When travelling to a mid-week away game coach always had the team fly home to Chapel Hill that night so that the “student athletes” could be in class for 8 AM classes (he loved 8 AM classes!) the next morning.  That’s also why he never liked games starting after 9 PM.  He said it wasn’t fair to the players.  He also ensured he knew what was going on in his players lives by checking in with teachers on a regular basis, and sending monitors to class to verify attendance because as he said the biggest thing we should take away from UNC was a “world class education.”

He also had a passion for recognizing hard work.   He famously would start every post game press conference by first acknowledging his opponent (“I want to congratulate coach ____ on what I thought was a very well prepared team whom we were very fortunate to outscore tonight”), and then immediately he wou start to give kudos to virtually every Tar Heel player that wasn’t the top scorer (“I thought Pat had a tremendous game setting screens so Donald could get some open looks, and Scott’s defensive pressure was a real difference maker tonight”).  Some would say he went out of his way to NOT recognize the top scorer of any given game.   Again the hallmark was appreciating the effort of those not given the spotlight.

What really made him remarkable to me however was his unwavering dedication to principles he disagreed with and would fight them against whatever odds were stacked against him.. Staunchly Democratic he was dedicated to some “liberal” causes, but he always had justification for his positions and was ahead of his time in many ways.  One of his biggest targets was the NCAA.   Not only did he not like late starts on games, which he laid at the feet of the NCAA, he despised the “television time outs” every four minutes of the game some of which went longer than 4 minutes themselves!  He would famously have his team on the floor ready to go in 90 seconds and players would literally stand around for 2 minutes sometimes as coach was making his point that the NCAA was to blame for the delay in play.   He similarly disdained the NCAA’s requirement to have the players on site for an NCAA tournament game the day before the game for “required” interviews that would rarely last for more than a few minutes.   I remember one particular time in Ogden, Utah the Heels were in town for a tournament game on a Wednesday and the star of the day, Jeff Lebo, was called into the interview room for an interview with all of the press that had gathered.  One question was asked and Lebo was dismissed.   Coach Smith then went on for 20 minutes about how the entire team’s academic schedule was interrupted for just one question from the press and the NCAA should be ashamed.

Although he used his platform effectively he famously was recalcitrant.  He did not travel with the team so to avoid the spotlight.  He would arrive at his weekly church service 5 minutes late, and leave 5 minutes early so he would not distract the pastor.   He never ate out.  He rarely granted interviews, and when he did it was begrudgingly done (the pre-game radio interview was always done 3 hours prior to the game).   He believed the focus should always be the “student athletes.”

All Tar Heels lost our leader yesterday and it was a sad day.   I’m sure he would not like the attention he is getting, but in this case the Coach is just going to have to forgive us all.