Word came from the North Carolina Department of Transportation on Tuesday afternoon that they were closing The Herbert C. Bonner Bridge that spans from Nags Head to Hatteras Island due to “immediate safety concerns.” 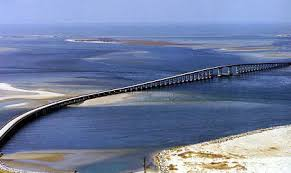 “Routine sonar scanning of the pilings on the span showed areas where too much sand eroded away from the support structure of the bridge” the press release from Tuesday afternoon indicated.  As DOT personnel continued to monitor these conditions, inspections revealed additional areas of concern, which led department officials to decide to close the bridge immediately for the safety of all residents and visitors to Hatteras Island.  The bridge will remain closed until the department can bring in additional resources to inspect the bridge and make necessary repairs to fortify the structure.  You can view the NCDOT press release here.

NCDOT declared as state of emergency as a way of expediting the process and steps are already underway to being repair work as soon as possible.

The closure, which took residents and visitors by surprise when it was announced at 1:30 PM on Tuesday, caused frustration and anger from travelers who were literally given an hour’s notice of the closure.  Initially DOT spokespersons indicated the closing was imminent, but there was no closing time given.  According to reports by The Outer Banks Voice a DOT truck arrived just before 3 PM and unloaded two barricades.  20 minutes later a worker dragged the barricades out to block southbound traffic to unceremoniously close the bridge.   Traffic began backing up immediately.

“Closing the Bonner Bridge is necessary to keep all travelers safe, but we know it will have a devastating effect on the people who live along and visit the Outer Banks,” said NCDOT Secretary Tona Tata.  “We will work to safely reopen this vital lifeline quickly.”

Warren Judge, Chairman of the Dare County Commissioners called the closure “devastating,” he went on to explain “I am told the less challenging repairs could take 30 days.  If it is more complicated (the repairs) it could take 3 or 4 months.”  To see television station WAVY 10 of Norfolk, Va’s coverage of the story click here.

NCDOT announced later in the day that emergency ferry service will start at Midnight Tuesday between Rodanthe and Stumpy Point and the system will be able to carry approximately 380 cars each way each day.  This compares to the more than 5,000 cars that normally travel over the Bonner Bridge each day.

Meanwhile some residents of Hatteras Island were trapped on the north side of the bridge without an immediate way to get home.  Some were residents who had traveled to the northern beaches for medical treatments, others worked on the northern beaches and had children they were trying to get back to on the other side.  One island resident summed up the feelings of many who were lined up at the north end of the bridge when she said “I don’t understand how this bridge is any less safe right now than it was when they let us across this morning.  Why couldn’t they give us 4 or 5 hours notice so people on both sides had enough notice?”

The closing of the Bonner Bridge does not affect travel to the northern Outer Banks as the Wright Memorial Bridge in Kitty Hawk and the bridges that link Nags Head to the mainland are still open and safe.